Since no new new pterosaurs were made since 2013, there haven’t been many new posts (only one or two per year). But now I have news since I just returned from the 24th Brazilian Congress of Palaeontology, which happened in Crato, Brazil.

Crato is situated in the Araripe basin, one of the most important paleontological sites in the world and where most of the Brazilian pterosaurs were discovered. It’s also one of the most important pterosaur sites and where the most well-preserved specimens were found. Most of the pterosaurs skeletons and skulls I made were based on species that were found in the Araripe basin: Tapejara, Tupuxuara, Tupandactylus, Caupedactylus and Anhanguera were all discovered here.

It was the second time a national paleontological congress happened in Crato (there is one every two years). During a week, palaeontologists from several parts of Brazil and from other countries participate in technical sessions, poster sessions, round tables, tutorials and other presentations, as well as field trips and social events. One of the nights there was a concert by a band called Pterorock, which played rock classics as well as versions of popular songs with original lyrics inspired by palaeontology.

During the congress I displayed my Tupuxuara leonardii skeleton and several pterosaur skulls. They all traveled safely in this big box made for the Tupuxuara. No bones or teeth were broken during the flights. 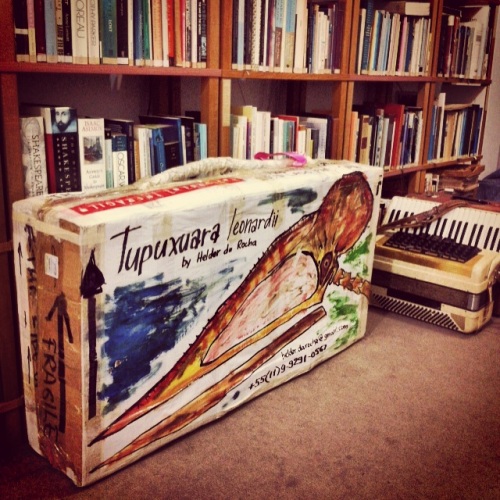 Tupuxuara was assembled inside a soccer goal and became a main attraction in the event. Everybody wanted to take a picture with it. 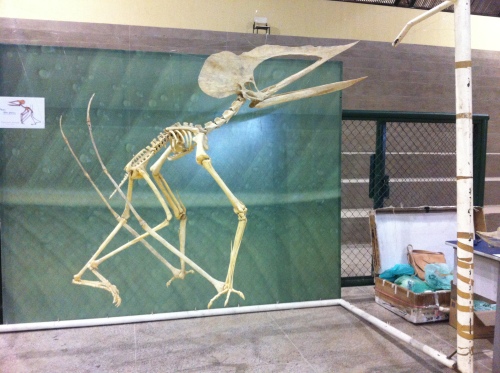 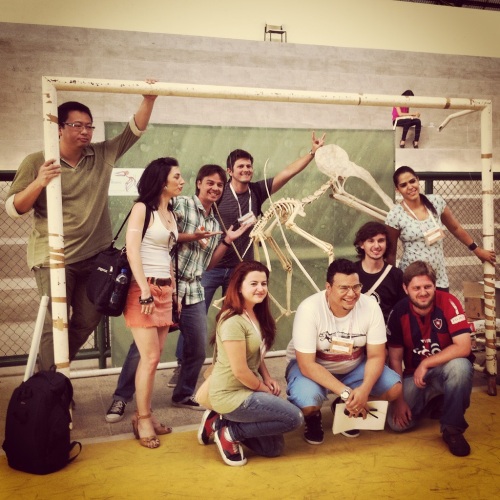 During the event I conducted a 3-day, 12-hour paleoart workshop for 15 participants, where I shared all I learned about making bone replicas from XPS foam. Here are some pictures from the workshop: 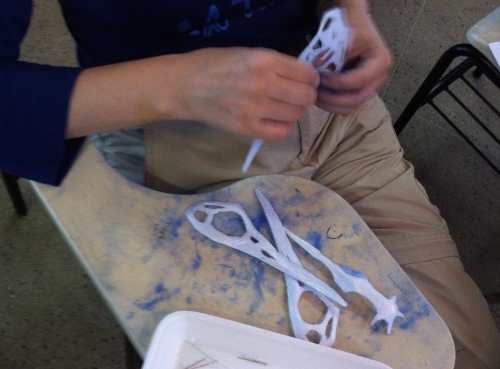 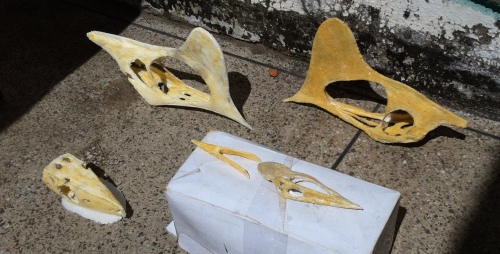 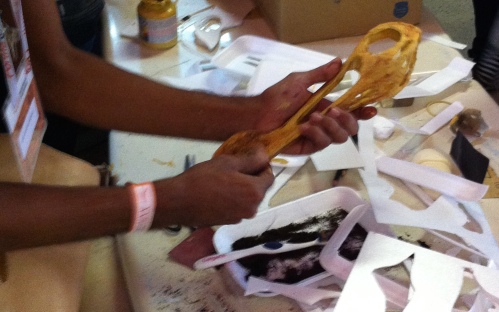 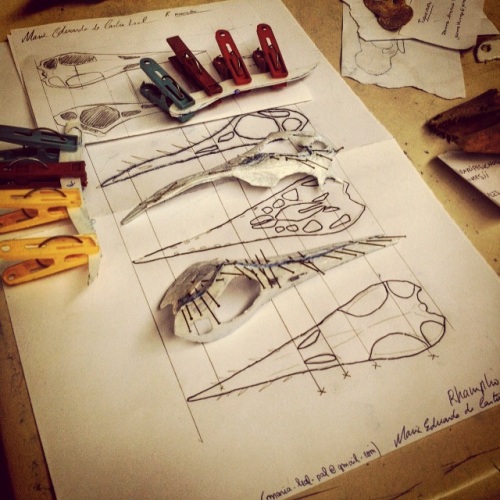 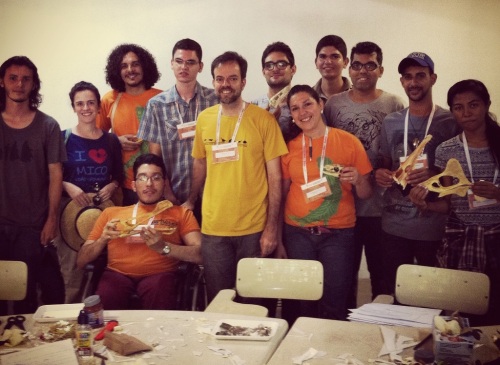 The results were impressive. The participants worked hard and despite the very short time we had (not enough for the glue and the paint to dry) some very nice replicas were created. Here are some of the replicas created by the participants after three days: 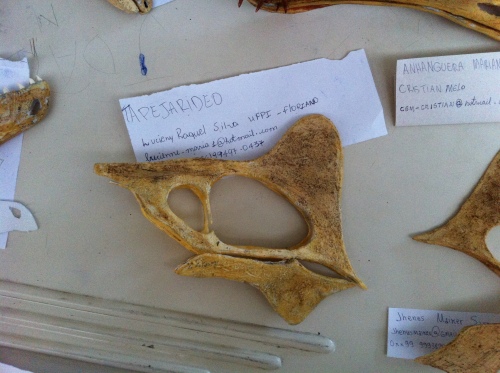 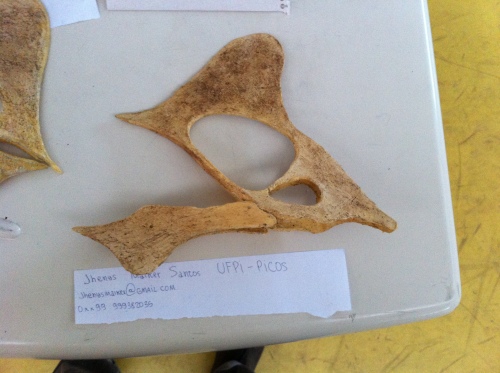 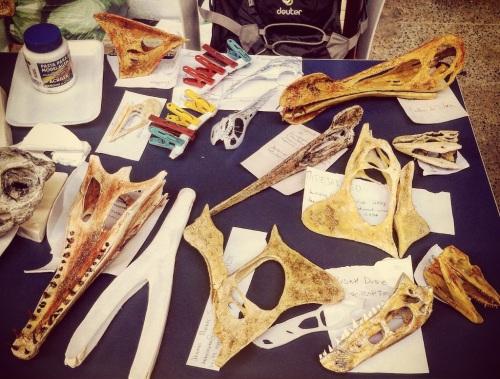 We also had a lot of attention from the local media and appeared twice in TV (in Portuguese):

The event finished on Thursday and on Friday I traveled with a group on a field trip to the most important sites of the Santana Formation. We started with a limestone mine in Nova Olinda (Crato formation), where it’s practically impossible to not find any fossils.

These are just a few of the Dastilbe fish fossils I found:

There are so many fossils that you find them even in the walls and floors of houses, shops, hotels and restaurants, in many of towns of the Araripe region:

We then went to the Parque dos Pterossauros (Pterosaur Park – part of the Araripe Geopark). It’s an excavation in Santana do Cariri (Romualdo Formation). Here the fossils are safely protected inside limestone nodules. 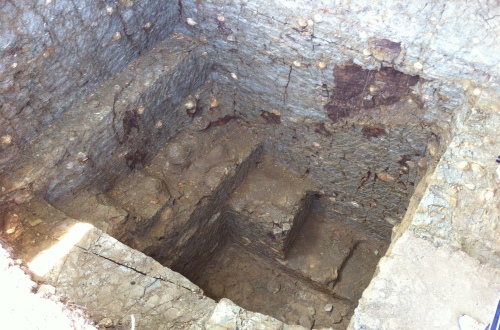 The paleontological museum in Santana do Cariri has a very interesting collection of fossils from the area: lots of plants, invertebrates, fish and pterosaurs. It’s definitely worth a visit. There were pterosaur fossils there that I’ve never seen anywhere before. 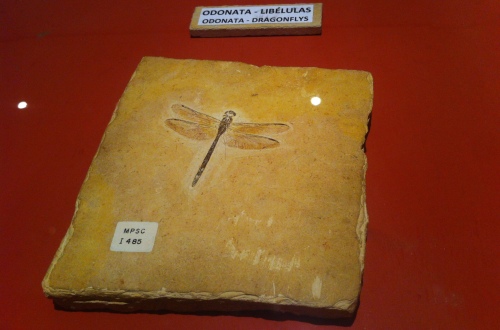 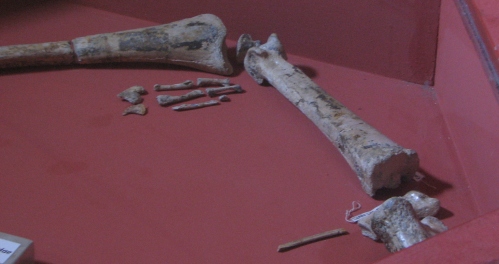 This was just one of the many trips that happened during the congress. Other groups visited many more sites of the Araripe Geopark. It’s a beautiful region definitely worth a longer visit.

Now the pterosaurs are back home until the next event. Tupuxuara is once again hanging in my living room, but in a different position. This is how Tupuxuara was displayed before we flew to Crato:

And now I assembled it in a landing position:

And that’s all for now. Hopefully I’ll have a new pterosaur to recreate soon, and should post more often.

PS.: I had also planned to show up this year with my pterosaurs at the Flugsaurier 2015 in Portsmouth, UK, but my strategy to pay for the trip (selling a pterosaur skeleton) didn’t work, and my savings (plan B) were significantly reduced after the devaluation of our local currency, so unfortunately it’s not this time that Tupuxuara will travel to the UK.

Filed under News and Exhibits